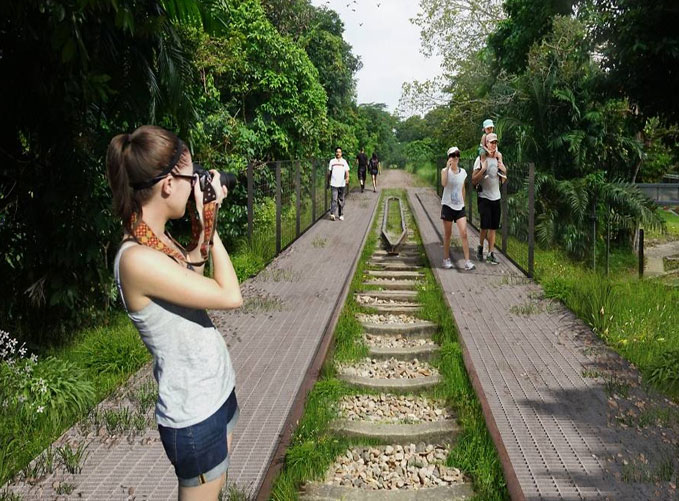 It is time to revisit this story again.  The redundant Casino to Murwillumbah railway line passes through many of the Northern Rivers shires. There are two competing teams vying for its future: Light Rail (The Byron Line) and the Rail Trail (walking and biking track).

A motion was passed in a September council meeting that read, ‘ Council considers a budget allocation at the September quarterly review to undertake further work on the Rail with Trail on the corridor between Mullumbimby and Byron Bay’.  Already $300,000 has been spent and another $500,000 odd, is likely to be thrown at it with this latest proposal. Many locals consider the Light Rail being pursued by the council to be a complete fantasy.

We now have two shires, Richmond Valley and Tweed, ready to build the rail trail to their borders. They have funding from State and Federal Governments. There is no funding as yet, on the horizon for the Light Rail idea. Byron Shire Council could be in the unenviable position of having nothing developed and the rail trail looking like a nice smile with the front teeth missing.

There is increasing disapproval to the idea of council spending large sums of money on a project that may not eventuate. Some residents are complaining that ratepayer funds should not be wasted on something that has no serious funding pathway. The Bangalow community and chamber of commerce, for example, wish to push on with the Rail Trail idea only. They see it as a good way to commute to Byron and the beach.

BSC Councilors voted 5 – 3 (Hunter, Spooner, and Hackett voted against) to proceed with funding further investigation of the state of the bridges. The engineering company Arcadis will look at the bridges (digitally) at a cost of $33,000 per bridge. Seems like a lot of money to look at bridges – from a drone!? There is even confusion about how many bridges there are. Arcadis think there are only seven while locals who have walked the track say there are up to 20. If so, it could be over $600,000 to do another study. Why (virtually) get in an expensive out of town consultants anyway. The people the Revive 2481 Facebook Page have been walking the track and know it well.

If this is how much it costs to look at the bridges, how much will it cost to fix them? The cost to bring them up to a standard to carry train carriages will be excessive. Byron Line proponents argue that light rail (looks like small buses) will not require as much load and will not be that much different than the walking track.

Let’s walk before we toot

The most logical middle option is to proceed with the Rail Trail option first. We could even leave the rail tracks between Byron and Mullumbimby. If later, further down the track so to speak, funds and backing become available then we can put the light rail in after we have got the Rail Trail up and going.

It is still dubious whether we will have a critical mass of people who would use the light rail. Most light rail projects that have gone ahead have had budget blowouts and installation problems. But there would be advantages to a light rail system. It would be a tourist activity that would boost the usage numbers and encourage them out into the hinterland more. The park and ride option would be more feasible if there was a stop where the line meets the highway at Tyagerah. This stop could also feed people into Byron as well as the Blues Fest site. Although the degree of people moving possible on a single track light rail is, at best, minimal.

The light rail will only be feasible if there are more people living on it and it can achieve critical mass. The idea would be to build two more villages – Tyagerah and Myocum. This would also help solve the critical lack of diverse housing in the shire as well as provide the necessary customers to the Light Rail to keep it funded and maintained.

One Reply to “Rail Trail Vs Light Rail”