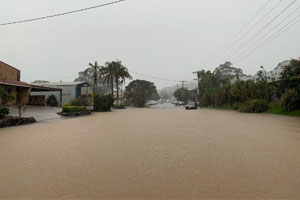 Insurance in the time of Climate Change

Growing up, my cousin’s family lived in Lismore. Every few years there would be a serious flood and my uncle’s chemist shop in the centre of town would be a disaster area. They would take months to get back to normal, even with flood insurance, and then wait for it to happen again. Many low lying houses in Lismore have always sold a bit cheaper because of this – and they are harder to insure. This issue has been quite isolated but is now becoming more prevalent and could be a game changer in relation to climate change.

The insurance industry spends vast amounts of time and effort calculating risk. An actuary is a business professional who deals with the measurement and management of risk and uncertainty. There is an industry joke that an actuary is just an accountant, minus the personality.

Actuaries and the insurance industry in general are taking climate change very seriously. This could be the sleeper issue that leaves all of the wrangling over energy prices in the dust. It is not just flood but also includes risk around storm, hail, hurricane and fire risk. The calculations due to the cost of covering property damage from increased dramatic weather events are starting to surface.

The insurance industry is already on the brink of “dangerous market failure”, according to Karl Mallon, director of science and systems at climate analytics company Climate Risk. “If the industry doesn’t step up, we’ll all pay — both as taxpayers picking up the bill for the recovery … or because of the impact on our communities and our economies,” says Dr Mallon. “This is a cost that is avoidable and we shouldn’t be walking into this but we are. We absolutely are.”

The Australian Actuaries Climate Index is intended to help businesses such as banks, investment firms and insurers assess the change in risk. It has adopted a shorter time frame following advice from Bureau of Meteorology and CSIRO scientists. “We’ve tried to take a magnifying glass to the extremes because … that’s what we think will have the biggest impact on people, society and businesses.

The Index tracks the changes in the frequency and intensity of extreme weather. They claim that roughly 850,000 homes — nearly one in 10 — could be “uninsurable” within a generation or two unless there are fundamental changes to where and how properties are built. Many more homeowners will have increases in policy premiums.

Insurance and the Slave Trade

In November 1781 a transport ship called the Zong got lost crossing the Atlantic. The Liverpool based vessel was overflowing with cargo – African slaves on the way to Jamaica. In order to save water, the captain ordered 130 slaves, half the cargo, to be thrown overboard to drown. Back in Liverpool, the ship owners claimed the loss of ” goods” against their insurance policy. The insurer fought the claim and it went to court and the shipowners lost the case.

The resulting trial and publicity did a lot to foster support for the cause of the abolitionists and the British government outlawed the slave trade soon after. It is not widely understood that a battle over insurance did a lot to shift public opinion over the slave trade. Could insurance play another important role in adopting adequate climate change policy?

Preparing for the Future

Getting accurate data is crucial. As we see in some sections of the media, science and evidence can be easily disputed. Byron Shire and other councils have been doing their best to put together accurate flood contour mapping. The maps provide the information on whether you are in the zone for a 20, 50 or 100-year flood. Todays 200 year flood level is soon to be classified as a future 100-year flood risk.

New properties being built in NSW must be compliant with the AHD – Australian Height Datum – in order to get a DA approval. The floor height must be a recommended height above natural ground level. The AHD is a measurement taken at 30 different sites at high tide around Australia in the early 70s. Many older homes in coastal towns or beside flood-prone rivers will fail this compliance test and have potential insurability issues in the future.

Another problem in our area is infrastructure and development that has hindered and not assisted future flood proofing. The Pacific Highway is a major piece of infrastructure that has reduced and hindered heavy rain run off to find its way back to the ocean. Many of the conduits and gaps that allow rainwater to escape are not maintained, get blocked up with flotsam and cause floodwaters to back up.

When Ocean Shores was subdivided, the developers were allowed to block off openings to the ocean. Parts of Mullumbimby, Byron and Brunswick Heads would benefit from creeks and minor waterways being dredged and de-silted. It’s debatable whether some people would see a dredging as too much of a disruption. Council would need to prepare for some serious push back from the public to do this.

There are already property sales that are experiencing insurability issues where there have not been any before. Professionals in this industry are thinking that we will need to see floor heights and the AHD of natural ground included in all contracts so potential buyers are alerted before a sale instead of later when they go for an insurance quote.
This is the canary in the coal mine and insurance industry insiders are trying to alert politicians and the public to expect major changes in this space. But reading the current climate it may be another case of too little too late.

The full article on this issue from the ABC online can be viewed here.