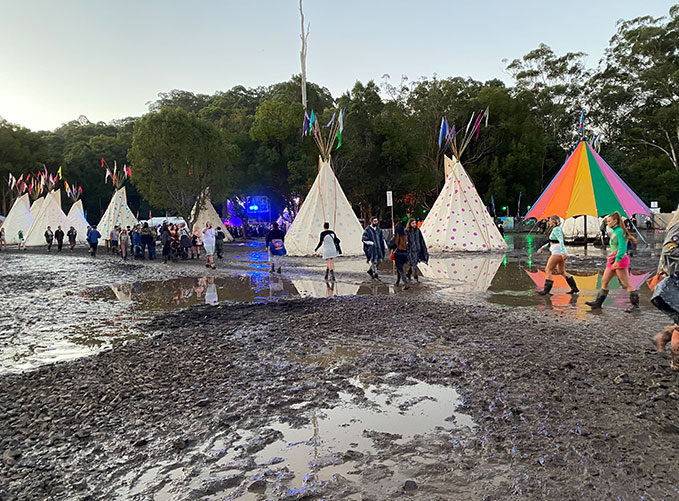 Last month, the Splendour in the Grass Festival team snatched a kind of success from the jaws of disaster. As usual, rain poured down on our shire creating a mud bath of epic proportions.  The first day’s entertainment had to be cancelled. SITG managed to find its footing (tish boom) and kept the show on the road.

It was a baptism of mud arriving on Sunday. Getting a wrist band and entering the site required getting your feet dirty. One had to wade through ankle to shin-deep sloshy mud to enter the site. Human adaptability and resilience are impressive. The first reaction is: this is impossible, let’s go home, but within 30 minutes you get used to it and take it in your slushy stride.

Appropriate footwear was highly advisable and gum boots were the fashion accessory de rigueur. But even gumboots were a problem. If they were too loose, you needed to tape or tie them to the upper leg. One boot could get stuck in the mud. Then a one-legged wobble dance occurred as the walker tried to push the foot back in, failing and falling full length into the mud.

The festival has copped a lot of flak – some deserved and some not. After spending time as a stage manager, I have a lot of empathy for anyone who puts on events. Then add in factors like Covid, erratic weather, mounting bureaucracy, and legal and insurance issues. Gives me a headache just thinking about it. Should we cut them some slack? Some in the community say that others love this event and see it as an important contributor to the shire.  So, let’s go over some of the issues:

The festival was allowed to increase its capacity from 35,000 to 50,000. This required more camping and parking. The BEV (Byron Events Farm; Blues Fest site at Tyagarah) was added on for parking and some camping. This required a shuttle bus service to run between the two sites, plus other local bus routes from other towns.

The regional bus routes were slow and irregular. Many people complained about this. The regular bus shuttle between BEV and North Byron Parklands (SITG site) worked reasonably well most of the time. However, there was a major breakdown at the end of Saturday and Sunday nights. The main headliner act would finish around midnight and tens of thousands of people needed transport.

In the past, the problem was people being stuck in their cars waiting to leave the site. Access to the highway from the site is a bottleneck. The bus shuttle looked to be a better option, but SITG had a shortage of drivers and one bus company from Tweed Heads failed to show up at all. People were left standing in a line for up to five or six hours after a big day trekking through mud. With no food, water, or toilets, this was a major issue and punters had a right to be peed-off. They need to figure out how to solve this or it should go back to the 35,000-capacity limit.

The state government brought in a new rule requiring all attendees under 18 to be accompanied by a responsible adult. This was going to be enforced at the entrance and all venues serving alcohol. Because this ruling was announced very late in the day it caused a problem as many wanted to resell their tickets. I agree with SITG that this is a nanny-state overreach and there would be simpler ways to keep kids away from the booze. Like ID checks at bars.

The claim is the festival site is not suitable because it has significant wilderness and flood-prone areas, is a koala corridor habitat and has indigenous heritage value. All of this is true to some extent. But from my understanding, a lot of the 600-acre site is a dedicated environmental reserve and has been remediated and is now in a lot better state than when first purchased. The previous owner of some of this land was a well-known eco vandal. I have toured the site and know first-hand that the SITG people take their environmental and indigenous heritage custodianship seriously.

It is hard to imagine what the wildlife thinks about their habitat being invaded by noisy humans for 3 days of the year. I am sure it’s not ideal for them and you can assume furry critters, as well as many humans, hate loud music. I always hear people say: It should not be here and put it somewhere else. I never hear critics say where this ‘somewhere else’ actually is.

There has been commentary that events like this are now inappropriate. Young attendees should put their time and energy into solving issues like climate change and environmental destruction. Maybe we should cut some slack here. Most have had some difficult years with lockdowns, weather and suffocating rules. They are faced every day with the potential trauma of a world in disarray. Mental health issues can be reduced by events like this – they deserve a party.

Do these events like this encourage and normalise bad behaviour, binge drinking, drug abuse and sexual misadventure? I am sure there are some edgy activities, but again, nanny-state? The day I was there, the vibe was good, people were enjoying themselves and I witnessed no obnoxious behaviour. Tweed-Byron Police superintendent Dave Roptell told the ABC, “From a policing perspective the festival was excellent. The crowds were well behaved, arrest numbers were down, and no one was hurt”.

Claim: The site is left like a tip and people leave all their junk and rubbish. Yes, many do. SITG has a policy now of recycling all usable camping gear and donating it to charity. The site is cleaned and remediated after every event.

It’s only about the money!

I know that some of the stall holders and local performers claim the event and management have gone too corporate and it is now all about the money. There is probably some truth to this. After all, the multinational entertainment group, Live Nation, purchased a majority share in Splendour in the Grass and Falls Festival in 2016.

I concur that approvals of events like this should not be just about the money, but let’s not gloss over the benefit. The 2022 Blues Fest, for example, has just announced its figures, which was $272m to the Australian economy and ‘the ravaged Northern Rivers community benefited to the tune of $143.9m.’ Splendour is bigger than Blues Fest.

An event of this size is not a part-time gig and it is not for the faint-hearted. SITG management would have had the blow torch to the belly leading up to, and during, this event. I hope they are well remunerated.

Bring Back the Trains:

I admit to being agnostic about the MURC (Multi-Use Rail Corridor) proposal. This is where the rail trail shares the track with a light rail between Byron and Mullumbimby. I doubt it will get funded but good luck if it gets up. I can see it could have some value for tourists and park-and-ride. But a solution to our shire wide transport, it will never be, especially during festivals. The idea that a few carriages on a single-lane track will move ten thousand people between midnight and 2 am is unrealistic.

On a lighter note, some background gossip. Just like big USA events like Coachella and SXSW, for some, it’s all about the parties. Your correspondent is not a party to these parties, but I am here to report back.

The big celebrity after-party this year was to be held at musician Angus Stone’s 120-acre property in Skinners Shoot. The hype was that a ‘bevy of the Hemsworths’ was going to show up. When none of the siblings made an entrance, the pampered ones were apparently quite miffed and had to take selfies of themselves instead.

A luxury home in Fig Tree Road, Myocum was rented for the week of the festival. Each room was filled up with designer fashion and the plan was that models and influencers were to be decked out in designer gear and then go out to the festival to be photographed and posted on all the socials. When the rain arrived, it was a washout, and no one wanted to go and have their shoes and dresses shot in the mud. Petulant selfies and catwalk exits were performed. News,com.au article here.