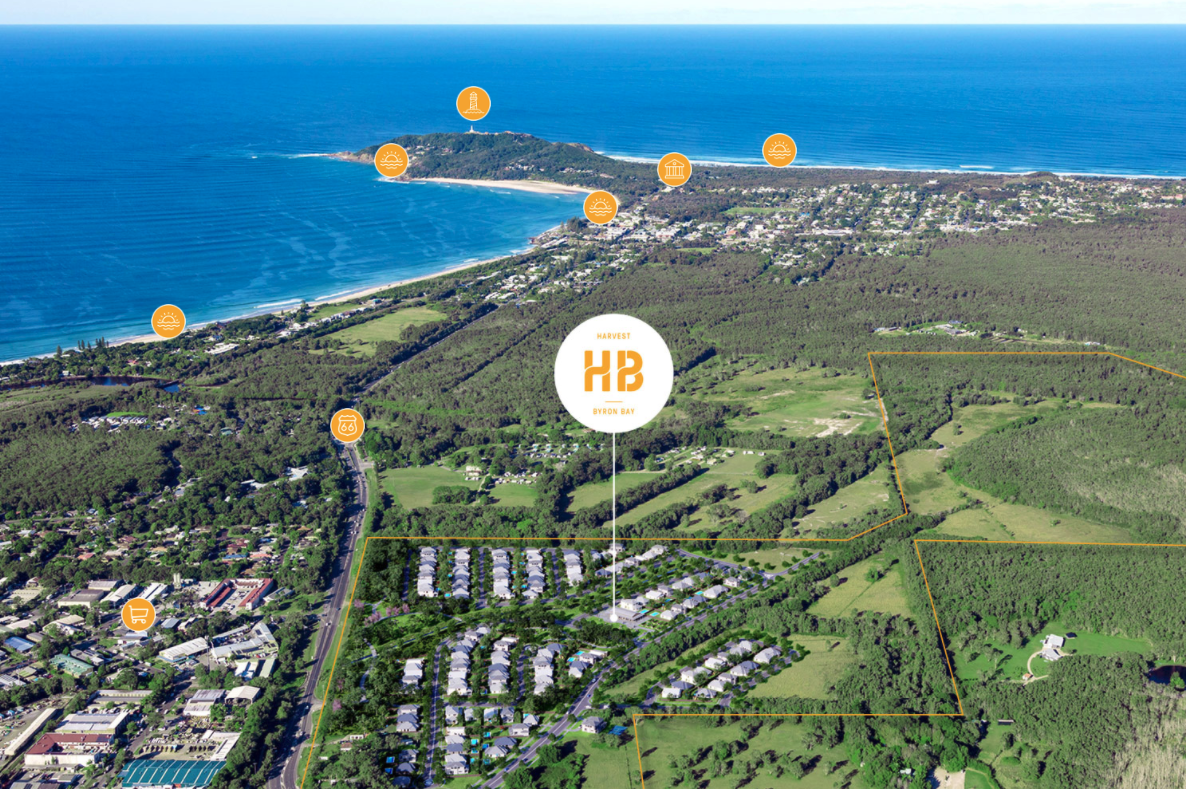 November 28th, 2021
Tower Holdings and First National have just released the first subdivision in Byron Bay for over 30 years.  Better known as West Byron, the site has been controversial and divisive for decades. Many locals have never wanted a development there and there are valid reasons for that opinion. Unfortunately, it’s not that simple.

Terry Agnew is the principal of Tower Holdings and is a well-known property developer. Regular readers may remember I shared an interview with Mr Agnew some issues ago where he discussed his West Byron property. The company has wisely decided to ditch the West Byron name realising it comes with too much negativity. They are now branding it as “Harvest”. Bet they will be marketing on Meta, not Facebook.

The Tower Holdings blurb says it will “set a precedent for sustainable and environmentally conscious design for future planned communities across Australia.” That will be a hard sell when the nominated builders are the fairly standard project home Metricon and Brighton Builders. It goes on: “energy-efficient homes on generously sized lots. The development is on 150 acres,  including 12 acres of recreational open space, bike paths and walking tracks, as well as a community centre and gardens.”

The first stage is ten of the total 149 House and Land packages. And with a buy-in price of around $3 mil each, you can forget about affordable housing. The original DA, in this or the neighbouring section, included a variety of housing types as well as a commercial and industrial precinct. Too bad that the things we actually needed were negotiated away to get the size down. Why our council did not achieve some affordable housing sites when all parties were at the table is a mystery, and hugely regrettable. As you can see this is something you expect in an outer suburb of a bland city and not suitable for Byron. 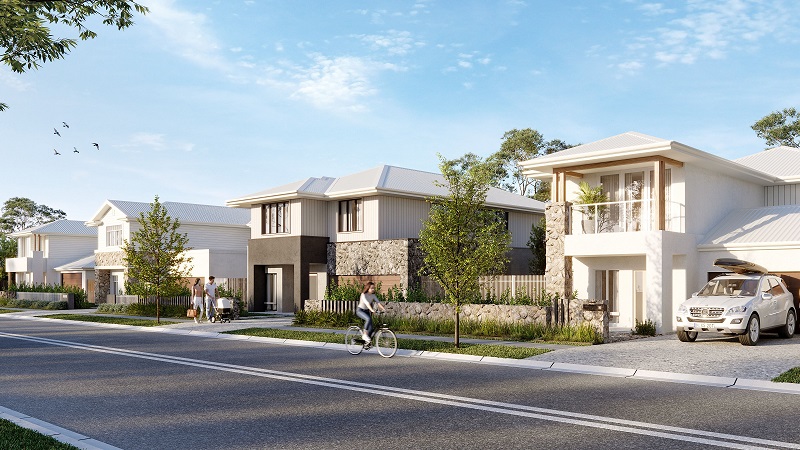 How Did We Get Here?

The higher, sandy, flood-free area of the site was looked at as an option for development back in the 80s with 1(D) zoning. A Green’s-led council refused to investigate the land in the 90s when a small syndicate of Byron locals owned it and made overtures to Council to talk but were rebuffed. Southern developers bought adjoining land and were also rebuffed. So the owners went to the state government and West Byron was rezoned and became a much larger area including flood and peat prone land with sensitive habitat.

Unsurprisingly many felt it was inappropriate and opposition became strong and vocal.  One wonders if the West Byron saga would not have happened if Council had simply proceeded then when West Byron was much smaller (and dryer). The original local syndicate still own part of West Byron and are awaiting court proceedings. Let’s hope we (Ie. Byron Council)  can do a better deal with their DA.

Tower Holdings ended up with the western and southern parts of the development. Under its subsidiary Villa World Byron, Tower first submitted plans to develop 282 properties, on their 75ha site in 2017. Their application was refused in 2019 with 2717 submissions against the project. That decision was overturned in the Land and Environment Court in December 2020, giving consent for the subdivision.

That was some time ago and I was not following this recent stage closely. I know that some councillors and staff met with Terry Agnew and hammered out a deal. The size and number of lots were reduced from 282 to 149. Now we end up with this – brick and tile McMansions on slab floors requiring a zillion truckloads of landfill. NSW state planning is also responsible for outcomes like this. Their cookie-cutter one size fits all planning process only encourages bland developments like this and discourages innovation and location appropriate development.

This is last century planning that does not cater for a mix of demographics that service a variety of needs – like single and couple dwelling, low cost and live-work. Yes, some environmental concessions were made and maybe a bit of greenwashing. But this does not suit Byron’s needs for the mid-twenty-first century.  To me, a missed opportunity and will we have to wait another 30 years to have another go?

Council at this time were in process with their admirable policy that all greenfield subdivisions need to dedicate 20% of the lots to Council for affordable housing. What a missed opportunity! A better way would have post-and-beam architect-designed homes, not project homes. They could have been clustered in habitat zones with more natural landscapes with artificial lakes to capture and run off the floodwaters.

On the positive side, in time, the development will blend into the environment more. It does have some environmental and eco contributions.  Some families will find a home and a way out of the burgeoning housing crisis we are in.

The release is being listed by First National Byron Bay and can be viewed here.