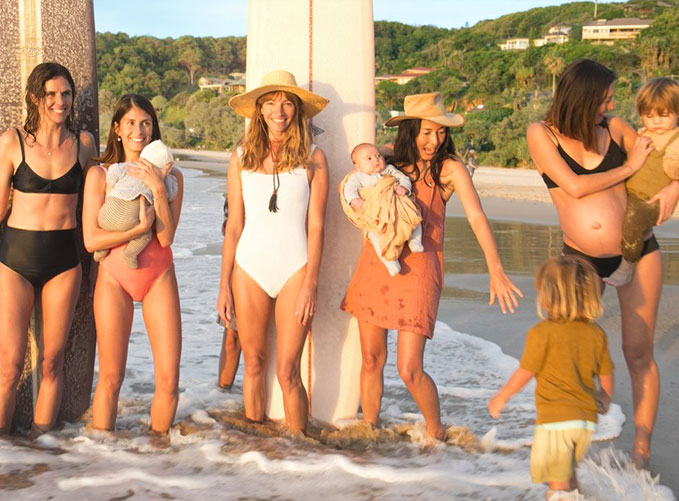 Invasion of the Insta Mums

Last month, Byron Bay was in the middle of yet another media firestorm. Global glossy mag Vanity Fair published an article on the ‘influencers’ of Byron Bay. There has already been invasions of dairy farmers, surfers, hippies, sea changers, now it’s the turn of the Insta-Mum aka Influencers – had to happen! You get to be an Insta-mum if you are an extremely attractive young mum with photogenic, barefoot kids, wear a lot of beige, and post pics of your ‘perfect’ life on Instagram. People follow you online and then companies pay you because the “followers”, who have to number in the hundreds of thousands, want to wear what you wear and eat what you eat. Welcome to the digital economy.

Byron Insta-mum, Courtney Adamo, was the focus of the story, called The Coast of Utopia. Adamo and her five kids, casual chic hubby, and a tight circle of hipster friends, all have curated Instagram accounts promoting products online. The article focused on the lifestyle of her gang of ‘Murfers’ (Surfing Mothers) as they go about their laid back, attractive lives in and around Byron Bay.

Vanity Fair didn’t hold back, putting the boot in good and hard:

“Commenters criticize [Adamo] relentlessly—for lacking transparency in disclosing sponsored posts and brand partnerships and gifts. For overexposing and commodifying her kids. For not letting them use screens while plastering them across hundreds of thousands of screens, where other people can see them but they can’t see themselves.”

The story created a lot of buzz and a backlash of venomous commentary. Follow-up articles were featured in the Sydney Morning Herald and The Guardian and others. Ms Adamo then fought back with her own article defending her lifestyle and choices following the criticism – mainly for using her photogenic kids for advertising fodder. (Byron Shire News rebranded the ‘Mummy Bloggers’ as ‘Mummy Floggers’.)

Adamo, originally American lived in London for ten years, before cruising the world looking for a place to live just like Byron Bay. She is what is known as a Trustafarian – a family trust fund has saved her from the indignity of having to go out and earn a real living. Just how much she earns as an online Influencer was also a point of contention, but it is not uncommon for successful Influencers to be earning six-figure incomes.

She is a descendant of E.W. Scripps, who founded the Scripps media company, which was so successful that it was put into a family trust in the 1920s, but which grew so large again that it was broken up in the 1970s. This is the nub of another criticism leveled against Adamo. How authentic is a back to a basic, weatherboard, stripped-down lifestyle when it is built on money so serious it has the hot breath of US anti-trust legislation bearing down on it?

The Hypocrisy and the Hype

The Guardian’s Brigid Delaney piled on as well:

The Byron Bay influencers’ accounts broadcast a stream of images, advertising a lifestyle that most of us will have no hope of attaining. It’s free-range parenting (vaccinations optional) heritage homes with $10,000 ovens, picnics with friends showcasing carefully curated baskets of organic produce, a “surf sesh” with the kids before school, crumpled linens in dusty rose (no stains), no screens, minimal makeup, and a scruffy/handsome husband. Byron Bay has become shorthand not just for the good life, but utopia.

Even our own local legend Mandy Nolan entered the fray via her Soapbox column in the Byron Shire Echo. She wants to start a platform for underachieving Mums who can also be under-the-influence: Hi I’m Mandy Nolan, and I’m launching a brand new social media platform for Mums who aren’t good looking. Mums with shitty lives no one wants. Mums like you and me. Mums who have fat unattractive or surly kids with bland names and no social skills. Mums who don’t have husbands, or if they do, they’re tradies, or they gamble, or they earn a minimum wage. This is a social media platform for Mums who have to work.

Joe Gagliese runs an influencer, marketing, and talent agency based in Toronto. He commented that he: ‘couldn’t think of another place like Byron Bay…I think that that place, that Byron place, is kind of like one of those unicorn locations,” he says, calling it an “example of the future—it’s either pretty scary or pretty cool, depending on how you look at it.’

The ABC online had a go

With the arrival of the “Insta-crew” some locals fear their beloved town is becoming a stage for promoting an unrealistic view of Utopia; some are concerned the distortion between fantasy and reality is infiltrating their everyday lives and that image and popularity are fast becoming more important than community values.

ABC Online: “After Vanity Fair came to town, Byron Bay took a long hard look at itself” by Natalie Grono

This is a valid concern for many of us. Byron may be becoming over-hyped with a global reputation that is not matched by the potholed roads, people living rough, and stretched infrastructure. For every Courtney Adamo arriving there are 3 or 4 long-term locals leaving because of the lack of any affordable housing.

The main criticism she has copped is around the hypocrisy of a lifestyle that is laid back, carefree and casual while at the same time monetising it and photo-shopping out all the bad bits. Adamo responded to the article with a spirited and intelligent response, ie; “I live my life, if you don’t like it, don’t follow it and I don’t care. Being born into a wealthy family is not a crime.”

To her credit, she did not stoop to show annoyance that the VF journo obviously gained her confidence only to eviscerate her in print. Interesting that the story’s photographer came to Adamo’s defence saying, as far as she could see, Adamo and all her friends were sincere and authentic people, with well cared for children and in loving relationships. I think we are displaying our own social hypocrisy when we start reviling people for being attractive, wealthy, and happy. After all, this is just the kind of aspirational readership Vanity Fair wants to cater to. Look in the mirror if you are looking for hypocrisy.

This Land is My Land

Mandy Nolan had another good point, in a further column in the Echo: Each wave of settlers (to Byron) seems to have a terra nullius mindset in regards to the lifestyle and values and even the existence of the people that came before them. Every new wave of Byronites seems to feel that what they’ve created is the quintessential Byron, and what stands before just falls into the sea. And it does! – The Echo, Good Lord, Byron July 24

I see this a lot. New settlers come and want to make it their own and then keep it just as it is – forever! Their idea of “nirvana found” needs to be captured and set in crystal, like in a snow dome. Then there are those people who come here thinking they have finally “made it”. They can be happy now, and when that happiness does not actually eventuate, they can get angry and frustrated.

Byron is, and always will be, facing lots of problems. But an invasion of attractive, beige wearing, Insta-mums is not one of them. It’s fine that people want to come here, shop at farmers’ markets, eat organic food, do yoga, and let their kids go barefoot. If articles like this, and people like Adamo and her friends, suggest to people there is a better, more relaxed way to live, then bring it on. Hopefully, it can be achieved without the online monetising or access to a trust fund. Well, I suppose there is one other reason as well – we are getting close to full here, so maybe try somewhere else as well.

And stop calling it Nirvana or Utopia, please. Like the Eagles sang: If you call somewhere paradise, kiss it goodbye