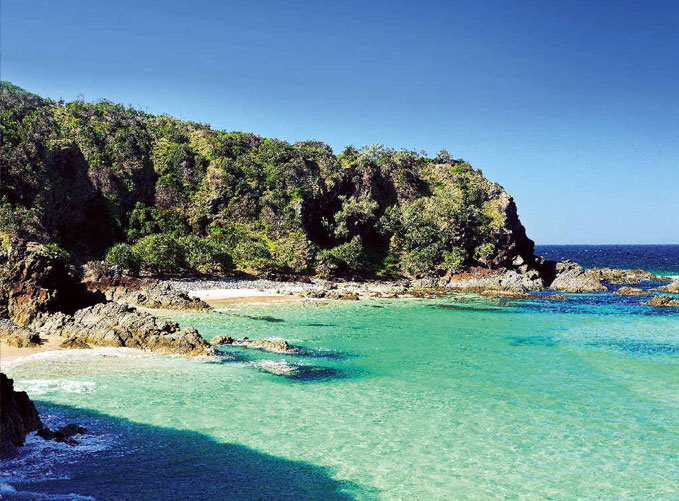 I’m a Celebrity! Get me to Byron

Byron Bay is a long way from the sleepy rural town with a meatworks and some surf. It is not unusual to see famous people blend into the local scene. One of the attractions may be that Byron people think they are too cool to hassle them for autographs or selfies. I used to live in Possum Creek and was there just up the road from Paul Hogan when he got married in the late 80s. That was probably the start of the slow celebrity invasion. I have seen Cate Blanchette at a local cafe, Led Zeppelin singer Robert Plant in Jonson Street, and actor Val Kilmer on Wategos Beach.

The A-lister in the hood is Chris Hemsworth – along with his extended clan and in-laws. His wife, Elsa Pataky, has some of her Spanish clan here and they have extra houses in Suffolk Park, whole the Hemsworth manor is in 7 mile Beach. Mr. Hemsworth tries to blend whenever possible when not shooting Hollywood blockbusters up at Movieworld on the Gold Coast or commuting to LA. ”We can walk straight down the beach, we can have a normal existence here and the kids have a hell of a lot more fun there than they did back in the States,” Hemsworth says.

International model Gemma Ward has purchased in Suffolk Park. The unpretentious Alcorn St beachfront property was bought for $1.6M. Not being a dedicated follower of fashion (though I love Zoolander), I asked myself, “Who the hell is Gemma Ward”. I still did not know so I had to ask Google. Married to photographer David Letts and with a two-year-old daughter born in Hawaii called Naia. The family divides their time between Australia, LA, and New York. Ms. Ward was the youngest model at 15 to ever appear on the American edition of Vogue. She has worked for Prada, Country Road, Ellery, and even once for Calvin Klein showing an androgynous side. Forbes rates her as the 11th highest-paid model in the world.
I suggest the tradies at the Suffolk Tavern tuck their blue singlets in from now on.

Highly respected journalist and TV presenter for the ABC, Kerry O’Brien has called Byron home for a couple of years now. Dubbed the Thinking Ladies Crumpet, O’Brien commuted to Sydney while still presenting ABC current affairs program Four Corners. He has taken community events very well and has MC’d and hosted a number of local events and panels like the Byron Writers Festival.

Iggy Azalea, “Get me outta here!”

Aussie tennis great Pat Rafter has purchased 28 hectares of land on Midgen Flat Road, Broken Head. The price of $1.35M was achieved after the battle-ax block with good northern rural views, had been listed for over a year. An unconfirmed rumour is that the Wimbledon champion and Davis Cup captain may be planning to start a tennis camp on the land. Pat and a bunch of mates do a beach workout at Broken Head Beach in the mornings. Friend David Gyngell returned home and only just survived a heart attack, so these sessions may be pretty strenuous.

Jon Ferris of INXS took over two years to find the right place to buy in the Byron Bay hinterland. Jon Ferris is the drummer of the iconic globally successful rock band INXS. He is also its principal songwriter, partnering with the now deceased, Michael Hutchence. Ferris and his wife Kerry have two children. They listed their Queens Park house in Sydney, opposite Centennial Park, which is selling for around $5M. They purchased a rural property in the byron hinterland in 2017.

The singer-songwriter who famously only took up guitar at age 22 moved to the Byron Bay area after the huge success of his first album Feeler. Being a sensitive man who has admitted he still gets camera-shy, Pete generally keeps his whereabouts under wraps.

The singer, actress, entrepreneur and all-round Aussie (English born) export famous for her role in Grease and the double-platinum Physical, regularly visit the Byron hinterland to look after her award-winning spa and retreat centre Gaia which she co-owns with three other friends, including Gregg Cave (pictured). The Bangalow area retreat, which owes much of its high-profile to Newton John’s own status and career, celebrated its 10th-anniversary last year.

US singer-songwriter Toni Childs once opened for Bob Dylan and sung duets with Peter Gabriel and Al Green. Now she enjoys her music career and property and is married to Mik Lavage, documentary maker, producer, and visual artist.

Angus Stone, one half of the Angus and Julia Stone musical duo, grew up in a suburb near Palm Beach but now lives on a 50-acre farm just outside of Byron Bay.

A member of the Oroton clan, Lane and his family have permanently shifted to the Northern Rivers to further their dream project, The Farm, in Ewingsdale.

The ex-chief executive officer of Nine Entertainment Co, and his wife television reporter Leila, built a home on St Helena Drive, the scenic rim of Cape Byron. David is the son of the so-called Father of Australian TV, Bruce Gyngell. David was also a close friend of media heir James Packer until the day they had a notorious big boy biffo brawl in Bondi. He also just made the news in July 2020 for narrowly surviving a massive heart attack after attending one of Pat Rafter’s beach gym sessions.

The Australian singer-songwriter and multi-instrumentalist is easily cool enough to hang at Coopers Shoot and go incognito in nearby, trendy Byron Bay.

London based singer/actress purchased a rural property in Myocum in 2016. Her move back to God’s own country has been delayed in order to deliver her new baby, Max. The actress cut her teeth on the Aussie soap, “Neighbours”, had an international hit song “Torn”, and starred opposite Rowan Atkinson in the first “Jonnie English” comedy film.

Byron Bay-based model and swimwear designer Olive Cooke and her fiance, Henry Tervenski, have bought their first property together. They’ve recently settled on a $320k block, with plans for a Palm Springs inspired home, in Epiq Lennox, the master-planned housing development in Lennox Head, on the coast between Byron Bay and Ballina. In reference to last month’s Invasion of the Insta-Mums story, Olive has 286,000 Instagram followers, which for some people in some circles these days is a measure of self-worth.

Tim is on the Team

Does Federal have an amateur dad’s soccer team? If so they may be getting a new recruit trying out for the squad. Superstar Socceroo Tim Cahill, purchased a house on acreage in Eureka in 2018 (pictured in the heading) but is yet to turn up at training. The three-bedroom, two-bathroom home sold for $1.7M and is on 13 acres.

Gold Logie winner, Carrie Bickmore, who co-presents with Waleed Ali on Channel Ten’s “The Project”, has purchased a $3M home in Massinger Street, Byron Bay. The property is just a short walk to Clarkes Beach and set on 935 sqm. The renovated four-bedroom 1920s original cottage retains its heritage features. Bickmore and hubby Chris Walker were holidaying in Byron over Xmas, posting lots of happy snaps on Clarkes Beach with their two kids.

Margot Robbie is a maybe

Margot Robbie was married at the fabulous Coorabella property in 2016. The rumour mill went mad for a while that she purchased a four-bedroom home in the Ilaneaus estate in Broken Head for $4 mil.
Ms. Robbie has had a spectacular rise in stature after starring in, and co-producing, the hit film, “I, Tonya”, which received a number of Oscar nominations. The actress spent a lot of her formative years growing up in Nerang of all places. Coming back to Byron is almost like coming home.

Some media have been reporting that A-list actor Matt Damon was throwing in the towel with the USA, due to Donald Trump, and moving his whole family to Byron Bay. His office has since refuted this story and stating categorically he is remaining in the States. The real story is he is renting a house for three months close to mate Chris Hemsworth down on Seven Mile Beach for some extended R&R but is not moving here permanently.

Follow the Money
Byron is attracting more members of the BRW Rich List every year. (FYI – the BRW is the Business Review Weekly and they publish the bios of the richest 200 people in Australia). Tony Quinn is on the list and he and his wife Christina have made an off-market purchase of a house on 530 M2 just off Clarkes Beach for $3.4M. They currently live in Main Beach, Gold Coast. Tony Quin made his first fortune with a pet food business that he sold for $410M. He then purchased iconic Aussie confectionery brand Darrell Lea for $25M, turned it around and resold it for $200M. The couple also spends time in New Zealand where they own a large estate with plans for residential development, golf course and motor race tracks.