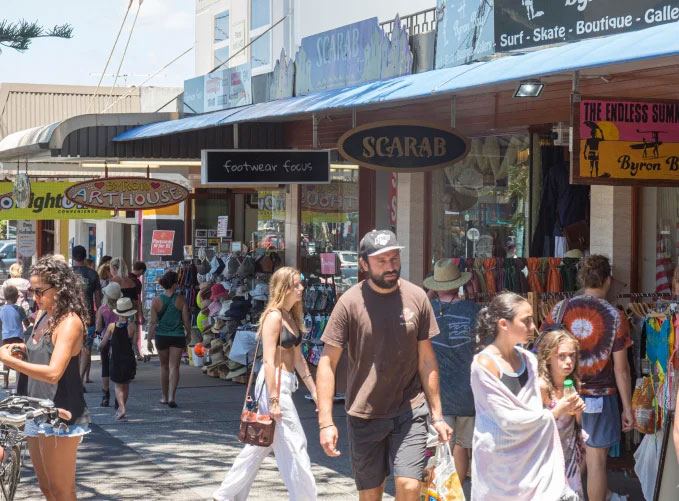 More on our “Champagne Problem”

Here is more on our “Champagne Problem”. The ongoing saga of our house price and rental situation has provided fodder for the media.  We took this recent Sydney Morning Herald article and added some commentary. There was also this article over the weekend giving the stats on the price rises and showing how Byron prices now beat Sydney median house prices.

Tiny homes and a community land trust are being touted as solutions to Byron Bay’s housing affordability crisis, which has been blamed on social media influencers, NIMBY activists and a lack of social housing.

Byron Shire is not the only region suffering from this issue – we are just more extreme and get more media about it.

Rents in the Byron Bay council area increased 26.4 per cent in the past year to $885 a week, according to the Domain Rent Report – higher than the median rent in many Sydney suburbs.

Byron Shire has the highest median house price in Australia – by far! Sydney’s median is $1,112,000, so we are nearly one third higher than our most expensive city. Rental increases are happening because new buyers are often over mortgaged and try to cover interest payment with rents. On the plus side, I know of more than a few local landlords who are keeping their rentals below the market value.

Byron councillor Cate Coorey, the founder of Byron Residents’ Group, said the town had been transformed from a residential community with some tourists to “touristification on steroids”.

“This was made much worse by social media – the ‘influencers’ flogging the perfect life, celebrity culture, gentrification,” she said. “Then add in cheap lending rates and COVID – the boom in domestic travel plus people working remotely.”

Cr Coorey said rapid development in Byron Shire over the past decade had not brought down prices. “We have more houses than ever but the prices keep jumping,” she said.

Instead, rent controls, stringent limits on Airbnb-type holiday rentals and more social housing would help to alleviate the housing crisis, she said.

Technically true, but needs a bit of nuance.  New releases in Bangalow and Mullumbimby means there is more housing stock (which is quickly snapped up). In-fill development (dual occupancy on rural and residential lots) has also provided more housing. However, there is a lot less medium density (read “affordable”) housing in Byron Shire than any of the other Northern Rivers shires. Nimbyism and fierce opposition from the “Just say no” councillors, of which Councillor Correy is one, has not helped with this.

“The only way to do anything about affordability is to radically increase the amount of housing stock,” he said. “But that runs the serious risk of injuring the natural environment and ruining what makes it special.”

True. All of the solutions currently being discussed are just band-aids and should have been planned and implemented years, if not decades, ago. Accepting higher density within our towns and villages while preserving agricultural and rural land is probably the preferred option and credit to the current council for choosing this pathway.

Byron Shire will have tighter restrictions on Airbnb-type rentals than other parts of the state under new regulations for short-term holiday rentals. A Planning Department spokeswoman said the government was assisting the council with a strategy to build more affordable housing and housing for key workers.

But Cr Richardson said state planning restrictions had so far stymied council efforts to encourage smaller homes with fewer bedrooms on smaller lots. “This housing price explosion is seriously fraying our community,” he said. “It is the closest to a genuine existential crisis we have faced.”

Affordable housing will permanently be out of reach unless free or very cheap land is sourced or gifted. The current council have a couple of options in process: Lot 22 and the old Mullum hospital site for example. The 90-day cap on AirBNB will maybe, at best, bring a few expensive long term rentals back on the market. It will have a negligible impact on the affordable housing issue.  This previous article goes deeper into this.

Fellow Byron councillor Paul Spooner said there was no silver bullet for affordable housing, warning many residents will never enter the housing market in the area.

“We must do things differently because the investment in property by the globally wealthy has created an affordability crisis for residents in the Shire,” he said. “Just building more dwellings will not alter this dynamic.”

Lisa Sandstrom, the spokeswoman for community group Bayside Connected, said Byron Bay was a victim of its own popularity. “Thousands of people moving in, in such a short time, is driving speculation and prices through the roof. Netflix shows don’t help,” she said, referring to the upcoming production Byron Baes.

The accompanying blog on the Netflix Byron Baes issue is here.

Urban Taskforce chief executive Tom Forrest said limiting the supply of homes – either physically, by communities or regulation – put upward pressure on prices. He said social housing was an attractive option “but I suspect this is not the highest priority of the NSW government”.

Housing Minister Melinda Pavey said social housing in the state had risen 10 per cent in the past nine years, with 300 additional social homes planned for northern NSW by 2024.

Blah blah, both state and federal governments have let social housing fall through the cracks for decades. This is a massive policy failure and they should not get away with it with these weasel words.

The council also voted this month to create a land trust for the development of affordable homes, but the initiative requires state government support.

A CLT, (Community Land Trust), is just one of many small band-aids that have been worming their way through the system for years. Although a good idea and can help it is not easy rolled out because of funding. It will still need public funding so even after this is created it is years in planning and sourcing the funding. PPP (Public-Private Partnership) will deliver options quicker and better. But this council does not have the capacity, aptitude or community approval to do deals with developers on publicly owned land.

Dr Matthews said towns like Byron Bay and Noosa had less development than other coastal locations and were protected by planning policies, in part, to protect the environment. “A lot of stakeholders have skin in the game in terms of keeping Byron’s exclusivity intact,” he said.

“Having rich enclaves on the coast and poorer ones inland is a failure of planning and a failure of leadership,” Cr Richardson said.

Ha ha! This is the nub of the problem. This issue is repeated all over the country and fails to get much attention. Basically, the rich get to influence development while the poor have to suffer in it. We are now at the crossroads as a community and are being forced to decide on whether we allow more density to house more people, or use the excuse that we are protecting the environment and amenity (read “real estate values”) and accept we become a monoculture of the wealthy and the elite. It may be time to make that decision.

One Reply to “More on our “Champagne Problem””