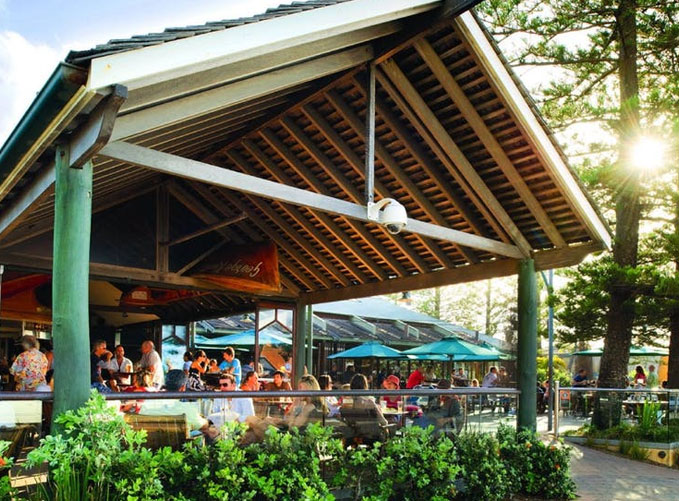 Some Aussie pubs are integral to a town’s character and history. The story of Byron Bay’s Beach Hotel (affectionately known as the Beachie) somehow encapsulates the changing fortunes of the Byron area. After going through lots of iterations, it’s on the market again – this time with a price tag of $100 million or more.

A bit of history

The Pier Hotel, as it was first called, was built in the 1880s, around the same time as the Great Northern Hotel. It welcomed visitors as they disembarked from the coastal steamers docking at the long jetty running out into the bay from the top end of Jonson St. The surfing spot known as the ‘The Wreck’ is the upturned hull, with its rudder bar protruding, from one of these steamers, the SS Wollongbah. It ran aground there during a storm in 1921.

Old photos of the Pier Hotel show a grand two-storey timber structure with long balconies overlooking the scrappy dunes running down to the almost empty beach. Like most pubs of the period, it was destroyed by fire more than once. By the 1960s it was a green-tiled swilling shop, servicing the last of the abattoir workers and the new locals, surfers on the dole.

I went in there only once – and once was enough. Rough tattooed bikies were playing pool. The pockmarked fibro walls were probably leaking asbestos. It was a bare shell that could be hosed out clean at the end of the drinking day.
John Cornell bought the Top Pub, as locals knew it, in the late 1980s. He had oodles of cash to splash from the phenomenal success of the Crocodile Dundee movies he produced with his mate Paul Hogan. These two put Byron on the map. Hogan built what he called the ‘world’s most expensive weekender’ out at Possum Creek. Cornell split his time between Belongil Beach and St Helena Ridge. The old abattoir building became known for a while as the Epicentre and that is where some of the scenes from Crocodile Dundee were filmed. What better analogy – a meatworks transformed into an independent film studio.

John Cornell made Paul Hogan a star after he was discovered as a cheeky wisecracking rigger on the Sydney Harbour Bridge. Cornell also managed fast bowler Dennis Lilley. Lilley’s suggestion to Cornell about the commercial potential of a more accessible form of cricket led to him and Kerry Packer developing World Series Cricket in the 1970s.
He saw the potential in Byron Bay. The Beach Hotel was not his only astute Byron real estate investment and he is probably still one of Byron’s biggest landowners. He and Hogan tried to start another Byron in the late 90s at a sleepy little town called Seventeen Seventy but that never really took off.

Cornell’s Beach Hotel was a cornerstone of Byron’s next iteration as a mainstream tourist destination based around the beach, the surf, the stunning natural beauty of the area and the laidback New Age character for which it was becoming famous.

And so began the golden age of the Top Pub. The old building was demolished and the pub reopened in 1990 in its present incarnation designed by noted architect Ian McKay, all vaulted timber ceiling and wall-to-wall glass overlooking the beach and the big blue Bay. It was a beautiful building in the perfect spot in a blessed town.

Under Cornell’s management, the Beachie was a well-oiled money-making machine. On a good day, turnover could be over $150k. It was good business – a very good business – and it was a hub for the locals who made it their own. We had coffee outside in the sun after our morning swims, took visitors to the bistro for lunch (or to Steve Snow’s famous Fins Restaurant for a big night out) and ground out moves on the dance floor after dark.

The Beachie had a heart and even, on some of those unforgettable summers Sunday afternoon sessions when Lisa Hunt or The Feramones were blasting out a blistering set to a full house of sweating and beaming punters, a shitload of soul. It was the jewel in our crown and we had every reason to be proud of it. Cornell and his wife Delvene Delaney were generous donors to community causes, sponsoring everything from soccer clubs to short story competitions. They might have made a heap of money out of us, but they had the good sense and sense of goodness to give a lot back.
Tarnished Gold

Then Cornell ran into, umm, ‘tax problems’ and in 2007, with age and ill health starting to slow him down, sold the Beachie for $44 million. The new buyer was Melbourne racing car driver Ken Twigg, who made his dosh out of ‘waste management’. Twigg engaged Melbourne hospitality family John and Lisa van Haandel to manage the pub. Twigg was basically an absentee landlord raking in profits to support his competitive car racing.

I think it’s fair to say that this was when the good old days came crashing down to earth. While Cornell and Delvene were emblematic of the adventurous ‘new money’ which nurtured Byron through the 80s and 90s into the new century, Twigg and his ‘waste management’ millions had about as much to do with the heart and soul of Byron as Donald Trump has to do with making America great again.

Big Money from Down South

In 2017 the pub was sold again, for $68.2 million to Melbourne’s Lieberman family’s Impact Investment Group. The Van Haandels were retained to keep running the joint. Interestingly, although it might sound like an arm of the US industrial/military machine, IIG’s mission statement was to ‘shift capital towards investments that blend financial returns with deep social and environmental impact’. So the new owners were a good Byron fit – bags of moolah and a sense of social responsibility. IIG made an immediate decision to remove ‘electronic gaming machines’ (aka pokies) from the Beachie, losing a valuable source of income but gaining valuable local cred. In its place, they created the ‘Green Room’, serving locally sourced food and drinks (well worth a visit BTW).

They also instituted a radical waste reduction campaign, decreasing landfill waste from 80% to 15% by using only compostable food and beverage containers where possible, training staff in rigorous recycling practices and ensuring all food waste ended up as compost. Sounds straightforward, but not so simple in a business that big. Good on them, I say. Their lack of complacency could teach us a bit about how to run our own homes.

And now, proving again the adage that ‘money never sleeps’ IIG are ‘taking advantage of the present low-interest environment’ to offload the pub often called ‘the heart of Byron Bay’ to new owners. The van Haandel family are moving on too, but are ‘excited to bring our vision for the evolution of the Beachie to new owners, with so much scope for business growth’.
With a price tag of $100 mill plus, you’d hope so.

What’s next for the Beachie?

The Beachie has embodied the evolution of Byron – from working-class beer barn to the commodification of Byron’s New Age spirit. This last incarnation was a good fit after Cornell. Many new settlers now arrive in town with bags of money from which the town can benefit greatly – and there’s no better example than ‘social impact investors’ such as IIG’s Lieberman family.
Let’s see what comes next before jumping to conclusions. But it could be ominous. When properties get that expensive, they can be mere assets, not cultural and community icons. Gerry Harvey has just sold his Byron at Byron resort to a Syrian billionaire. Harvey and his wife Katie Page spent years nurturing a unique chic style for the resort – accessible to locals, and very Byron. Will this be retained? There is a certain level of wealth that has no interest in contributing, only growing itself and then leaving. Hopefully, the next iteration of the Beach Hotel is also the next chapter in a unique and fascinating story – not just a piece of real estate on an asset register.

$100 million for ‘the heart of Byron’? Let’s hope the heart stays healthy.