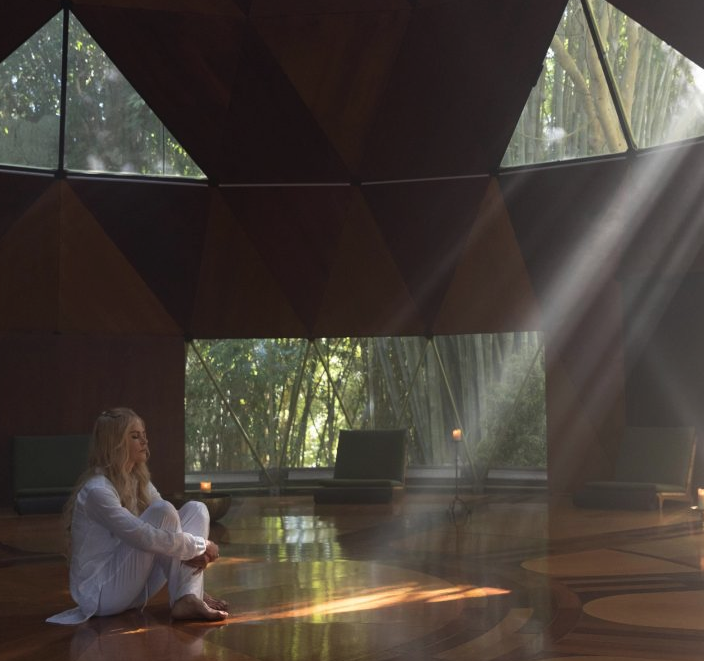 Nine Perfect Strangers was just one of a number of film and TV productions shot here last year. It has just been released on the new streaming platform Amazon Prime.  Nicole Kidman was the producer and star. Reviews are mixed but Ms Kidman’s acting gets high acclaim. She plays a wacky Russian therapist and New Age group leader at a luxury retreat.

The A-list cast also included Melissa McCarthy, Luke Evans, Michael Shannon, Regina Hall, and Asher Keddie. It was based on Liane Moriarty’s book by the same name. Moriarty is a Sydney writer who also penned the book behind the very successful series Big Little Lies.

Newly opened Soma in Kennedys Lane, Ewingsdale was the stand-in for uber-exclusive “Tranquillum House”. The health and well-being retreat is run by the enigmatic Masha played by Kidman. The series explores the insatiable desire of people to “get well”, along with the people who will exploit other people’s vulnerabilities for their own personal gain. Originally to be filmed in Big Sur, California, the location switched to Oz when the pandemic hit.

During the almost five months of filming between August and December last year, Kidman worked and lived in a “bubble” in Byron Bay, sharing a house with her sister, children, lawyer and former journalist Antonia Marran. “You basically create a bubble, you don’t go outside of it but you do have a very strong, safe place,” Kidman says. “We were lucky because Byron Bay had no cases, and Sydney was not in the place that it’s in now. We didn’t feel restricted.”

A second location was Lune de Sang. This property is a number of titles combined into a reforested valley just outside Federal. Mining executive turned glass artist Andy Plummer and his wife, Deirdre have been investing big in forestry regrowth over hundreds of hectares of old grazing land.  Not only does the property include a number of stunning architectural buildings, but has been completely reforested with native hardwood timber forests. An interesting third location was some back streets in the middle of Ballina. Fake snow was used to make it look like a town in the northeast of the USA in winter.

The $100 million dollar production was not without its detractors. There was one unlucky day when filming was happening on Bangalow Road, while at the same time road works were being done on Ewingsdale Road. This meant that both entrances to Byron were blocked and pandemonium ensued. Spoiler alert: a twist in the plot involves Nicole Kidman’s character including some interesting ingredients in the green smoothies she serves to her high paying guests! Amazon Prime is a subscription streaming platform.

Another completed production is the 8 part series Eden now screening on Stan. I watched a couple of episodes but it did not grab me. It is skewed towards a teenage audience but I tried to interest my own teenage daughter who also did not engage. Although you could make out the location as being local it was shot to be a generic beach town that could be anywhere. The blub says: “Eden follows the disappearance of a young woman which triggers a devastating chain of events that lays bare the dark, hidden heart of paradise.”

Seriously Red is a feature from Dollhouse Productions. Rose Byrne is a producer and cast member, Gracie Otto directs and Krew Boyland is the writer and star. The film follows Red (Boylan), a vivacious and hilarious red-headed Dolly Parton impersonator grappling with high expectations and low self-esteem. The release date has been hindered and delayed by some post-production issues.

The much-discussed reality TV show, Byron Baes is yet to see the light of day. The series following a number of local influencers was mainly shot in Ballina due to the amount of pushback it created here. Many believed it would show Byron Bay in a bad light. The release date has also suffered a setback due to a trademark dispute. Teena Zerefos Waldron, the owner of a children’s store Bondi Beach Baby, has filed an application opposing the trademark. The reason for the opposition to the trademark is unclear, but Ms Waldron does sell ‘Bae Bibs’ for babies.

About to start shooting locally is The Block. This is the Channel 9 juggernaut that has contestants compete against each other to complete a build or a renovation. The show has been looking for 6 houses in Sunrise Beach to use as a location. It is also receiving a bit of negative attention but is doing its best to stay discreet. The co-host of the show is Shelley Croft who is married to local real estate agent Christian Sergiacomi from Pacifico Property. No prizes for guessing who is doing the search for suitable properties.