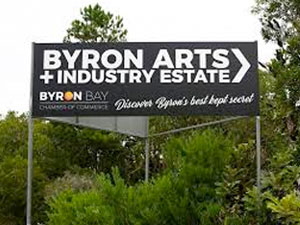 Drive through the Byron Arts and Industry Estate and you will see how busy it has become. Unfortunately, many of the parked cars are not just workers as many units have been converted into studios. The powers that be have been up against the wall of late trying to solve the problem of where to place more industrial land. The BILS (Business and Industrial Land Strategy) has now been passed by NSW state planning so, at last, things are progressing. Many of the successful local businesses (Byron Bay Cookies, Stone and Wood, Brookfarm, etc) have been crying out for space to expand and some have even considered leaving the shire.

Byron Arts and Industry Estate has no land to expand to, but across the road at West Byron (if it happens) has 7.5 Ha of land slated for industrial. Mullumbimby, Billinudgel and Bangalow industrial estates have some space that they can expand to. But a new area known as Gulgan East and West is also under consideration. This is flat land near the Blues Fest site (East Gulgan) and the large empty paddock south of Gulgan Road as you exit the Mullumbimby turnoff (West Gulgan). There is also a portion of land on Saddle Road Brunswick Heads under investigation for Business Park (Creative Industry offices). This land was originally earmarked for the Brunswick Eco Village. Somehow, and for some reason, this property has become very political and has coordinated opposition against it being developed.

Byron Shire is experiencing a big influx of people wanting to set up SMEs (Small Medium Enterprises). The idea of providing space for them and creative industries is necessary. We need to diversify from being a predominately tourist town. Also, local kids can find interesting rewarding work instead of cleaning Airbnbs and being baristas.

One Reply to “Land for Industrial Estates”