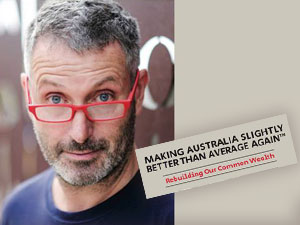 Local lawyer, comedian, author, and man about town, Mark Swivel, is having a run at federal parliament. He will be running for the Senate in the election later this year – probably May. He has started a political party called “The Together Party”. Mark’s book is called “Let’s Make Australia Slightly Better Than Average Again” is quite a good read – smart and funny with a good synopsis of what’s wrong with politics and some ideas on how to fix it.

The Together Party is putting on a conference in Mullumbimby the weekend of February 15 and 16. Please come along if you want to get involved, or just attend some of the interesting discussions being held.