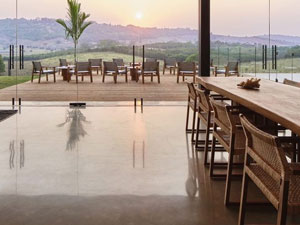 Get ready for another onslaught of film and TV type people in town. Three new film and TV projects will begin filming in Byron in August. The big one is the $100 million production of Nine Perfect Strangers starring and produced by Nicole Kidman. This is the follow on to the huge international success of Big Little Lies. Sydney writer, Lianne Moriarty, has penned these two, and a string of successful dramas. Nine Perfect Strangers chronicles the weird and wonderful events that occur on a rural spiritual retreat – how appropriate for Byron! It will be filmed at the Soma Retreat in Ewingsdale pictured above.

Nicole and hubby Keith Urban were allowed to self-isolate in their southern highlands home at their own expense instead of a hotel. The other projects include a 6-part mini-series for streaming platform Hulu and a low budget feature film. If you think you have a great location and happy to have people yelling Camera Lights Action there, you can register your property here.