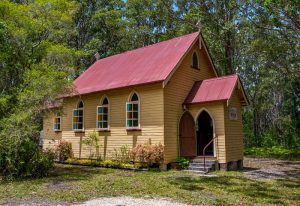 The local Anglican Church diocese is not winning any converts with its plans to sell off the 99-year-old church on Broken Head Road. The church and land were gifted to the community to commemorate three fallen WW1 soldiers. The press release noted; “This is a major restructuring program…for funding various new initiatives and allow the church to meet the costs arising from historical claims of abuse.” The Church of England, as it was known until 1981, has paid $31m in compensation to date. Only half the number of complainants have received compensation with an average of $67,000 each.

The amount hoping to be returned to the coffers with this sale is somewhere around the low one million. EOI closes December 14th and is listed with David Gordon from Ray White Byron Bay. A public meeting was held at the church on 21st November chaired by ex-Mayor Jan Barham and pro bono legal advice by mayoral candidate Mark Swivel, looking at ways to keep the hall in community hands.