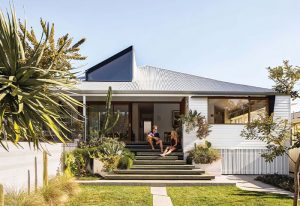 Local architect, Harley Graham, has been responsible for some of the more interesting local houses and projects. Stone and Wood Brewery, Casuarina Commons, and Linnaeus Estate to name just a few. Although known more for his modernist style, his own project took a different turn.

This recent article in ArchitectureAU features his finished design of an old Queenslander saved from demolition. The original plan was to move a c. 1910 timber cottage from Brisbane to a 500-square-metre level block in Byron Bay. Then to renovate it and then perhaps probably sell it. But those plans were derailed, and the house needed to be transformed into a home for Harley and his two teenage children. When he drove down to see the house – which had been “stored” in a cane field in Ballina – he found the protective tarpaulins had blown off, leaving the home waterlogged and rotting. After 18 months of exposure, the house was in a sad state, its verandah hanging by a thread. The finished outcome looks to be worth the effort.